The tech fanatics are going gaga over the newly launched 2017 version of Samsung Galaxy A5 Singapore. Samsung launched their all new version of A-series recently in the first week of January at a closed event. Although the handset is yet to be made available for the commoners but the meter of excitement among the people is increasing at an astonishing rate. Since the handset is not coming to the market for another few months, we cannot provide you with the full review but we have managed to make a hands-on review for this renewed version of A5 which will be very helpful in providing you with proper insights on this smartphone.

Design and Build up
The most amazing thing that everyone will love about the new A5 is its design. The phone has several similarities with the most beloved smartphone of Samsung, the S7. From the curved back to the rounded edges, A5 has all the elements to become one of the major flagships of Samsung. The curved back and rounded edges make does not only make the smartphone very attractive but it also makes it highly convenient for use. Moreover, the renewed version is also slightly thicker than the 2016 model; hence, it helps in providing a proper grip to the users. 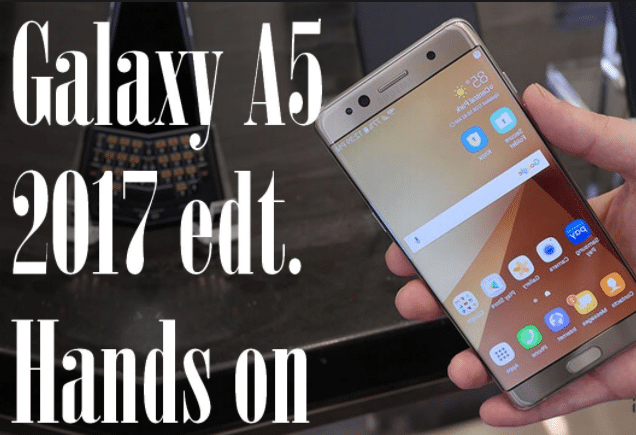 The 2017 version of Samsung Galaxy A5 is equipped with 3000mAh battery; which does not only increase the performance of the phone battery but also makes the processes of the phone highly efficient. You will no longer need to plug your phone into the charger to use it all day. The fast charging has also been included in this renewed version of A5. This all new smartphone from Samsung will also be made available in Gold Sand, Peach cloud, Blue mist and Black sky colours.
Whenever we buy a phone we look for the latest features in it and if you are expecting something similar then you will not at all be disappointed. The latest addition in this yet to be launched smartphone from Samsung is the fingerprint scanner in the home button of the phone. With the help of the fingerprint scanner, you will be able to unlock your phone with just the touch of your finger and you will also be able to lock some of your important apps with your fingerprint thereby protecting your privacy. The new A5 is IP68 certified, which means that this smartphone from Samsung is water as well as dust proof. Hence, you will be able to use the new A5 in any weather condition without having to worry about damaging it.

Specifications
The best thing about the 2017 version of Galaxy A5 is the microprocessor chipset that it uses. The all new A5 uses a 14nm 1.9GHz Exynos 7 Octa-core 7880 chipset along with a Mali-T830 GPU and when it gets coupled with a 3GB RAM then you can be totally assured of its superior performance.

The Galaxy A5 2017 version also comes with a 5.2 inch super AMOLED display with full HD resolution which does not provide you with maximum clarity in picture but also makes it highly vibrant. Galaxy A5 is also equipped with two 16 MP cameras; one for the front and one for the back. Both of the cameras shoot video in 1080p full HD quality apart from capturing sharp high definition quality pictures. A5 also runs one the android 6.0.1 Marshmallow like its other siblings and Samsung has also included the much loved Grace UX in A5 as a treat to their users.
Another important change in the all new A5 from its 2016 counterpart is the positioning of the speaker, which has been changed from the bottom to the right side of the speaker below the power button for providing the users with the best sound quality.
Since the renewed version of A5 is yet to be launched in the market, thus several tests are yet to be done on the phone. However, the price is not yet disclosed. But one thing that we cannot deny is that A5 is going to be one of the best ones in its Singapore price range and users are going to like the phone as it has everything that a smartphone needs to become a popular flagship.