In September 2016, Apple announced the launch of another amazing phone- the Jet Black iPhone 7 and iPhone 7 Plus. Soon after this announcement, people waited in anticipation and just couldn’t hold their breath to grab the glossy iPhone model. However, iPhone manufacturers indicated issues in producing mass quantities of handsets. Reports by KGI Securities Analyst Ming-Chi Kuo threw light on serious production problems along with delays in shipping facilities. Inside sources from Apple blamed the unfavourable weather and mechanical issues for the shipping inconveniences.
Amidst such circumstances, about 60% to 70% of iPhone 7 handsets had successfully passed the Apple’s quality and standard test. Although the model had been available since its launch, yet the glossy and beautiful jet black colour sold out the handsets, much before it was released in markets. According to Apple sources, they had to sell the phones to meet the pre-order period demand. Thus, those looking for the iPhone soon after its release in September, were asked to wait for three to five weeks to get the phone. And then citing shipping and production issues, Apple officially postponed its shipping to November. Until then, the model was available only in limited numbers in stores.
Jet Black was a buzz among the iPhone fans and other Smartphone users for its fine glossy mirror finish, which gave a bezel effect on the phone. For the first time, iPhone had a no-border device. This however meant a complicated manufacturing process, which took beyond the stipulated time.
After all the hassles, when the phone was finally available in sufficient quantities in the market, users were relieved. They greeted the iPhone with great enthusiasm and were more than happy to show-off their new Apple device. And while using the phone, people gradually realised that the best feature of the model had the worst outcome. They were definitely not happy with the scratches on the glossy finishing of their phone. 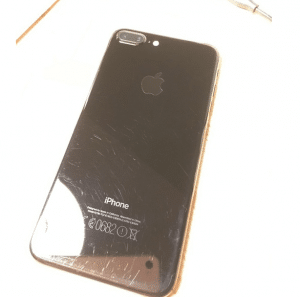 Apple knew about this and the brand came up with a clear disclaimer stating that the glossy finishing has been achieved through a 9-step anodization and polishing process, which made it prone to scratches. Although the phone’s surface was as hard as the other anodized Apple models; its shinny finishing had high chances of developing micro-abrasions, with use. It warned its users of the potential threat and suggested protecting the phone with a case.
In spite of a fair and clear warning, the iPhone Jet Black users bought the model, ignored the statement and went ahead flaunting with their new phone and boasting its unique features. Gradually, after using it for a month or two; people started facing problems with the look and design- features that they had been proud off, earlier. The phone developed scratches on the Jet Black finish; however, it was not that noticeable in normal light conditions. The scratches were only visible at certain light angles, in the presence of bright light. Besides the glossy finishing, the phone looks great, and with all other features; serves excellent usability.