A couple of years earlier, the movie Founder released. It’s the story of how Mac Donalds began and how Ray Kroc took it to the next level and built a roaring billion dollar empire.

One of the most famous dialogues in that movie is the following.

“You’re not in the hamburger business, you’re in the real estate business,”

In Shenzhen, China. It can be said that a similar dialogue was uttered in the offices of Huawei.

“ We are not in the smartphone business, we are in the camera business.”

Huawei’s latest offering The P20 Pro that goes live on April 7th in Singapore is a Camera first smartphone. The camera is so important, that they have four of them in it.

You read that right. Four!

So dual cameras have been the rage for quite some time now. Every smartphone maker has jumped on the bandwagon and have touted their camera’s ability.

Huawei has three cameras in the back and it’s brilliant. The front camera in itself is 24 megapixels which says something about the effort they’ve taken.

Breaking down the camera

So what makes Huawei P20 pro’s camera special? Or rather cameras.

The top camera is  8 megapixel with an Aperture of f/2.4. It packs an Optical Image Stabilization feature that is powered by AI. The focal length is 52mm which is great for taking long portrait shots.

The middle sensor has a whopping 41 megapixel. If you are a smartphone geek, you will correctly recollect that the Nokia Lumia 1020 in 2012 boasted the same number of megapixels in one camera. This is the highest in the industry. It has a 28mm focal length with an aperture of 1.8.

The last and final lens is a 20 megapixel, with 20mm. It’s a monochrome shooter with an aperture of 1.6.

The camera has a four way hybrid autofocus that takes into account Laser, Depth, Contrast and Face Detection. This hybrid four way is not possible without the sensors that the camera has.

The main module of the camera has a laser transmitted and a laser receiver. The flash module that is below the main module has a colour temperature sensor. This sensor brings about the accuracy in terms of colours.

Normal cameras won’t be able to pick up subtle color differences. For example, if you are taking a photo of a white room with a white mug in it and if the color tone of the whites are different. The P20’s camera will be able to pick it up.

The P20 Pro also boasts some big numbers for it’s camera. The ISO for this camera is about 102,400. The maximum for any phone. In the history of any phone. The closest competitors to this are the Apple iPhone X and Samsung S9 that have around 6400 ISO. This is a big difference.

So what is ISO? In simple terms, ISO is the feature that brightens or darkens your photo.

One of the main things Huawei focused on was improving the performance of the camera in low light and they have succeeded in that.

The zoom is another thing that Huawei have perfected. They are able to get a 3x zoom comfortably without any pixelation because of their seperate lenses for monochrome and telephoto.

The AI Image Stabilization which is the ‘feature’ that Huawei has been promoting has 4D predictive focus.

To make their camera more agile and nimble for this fast paced environment, they have an Ultra Snapshot feature that accesses the camera without opening up the app. It takes a photo in 0.3 seconds.

The slow-mo feature which was popularized by Apple is there in the P20 pro as well. It can take 720p quality videos in slow-mo at 960 frames per second.

Although the features have been touted to be the greatest. What about reality and actual testing?

DXOMARK is a research company that specializes in quality of photos and imaging. They are the industry standard for camera and video quality. So how have they rated the Huawei P20 Pro’s camera? 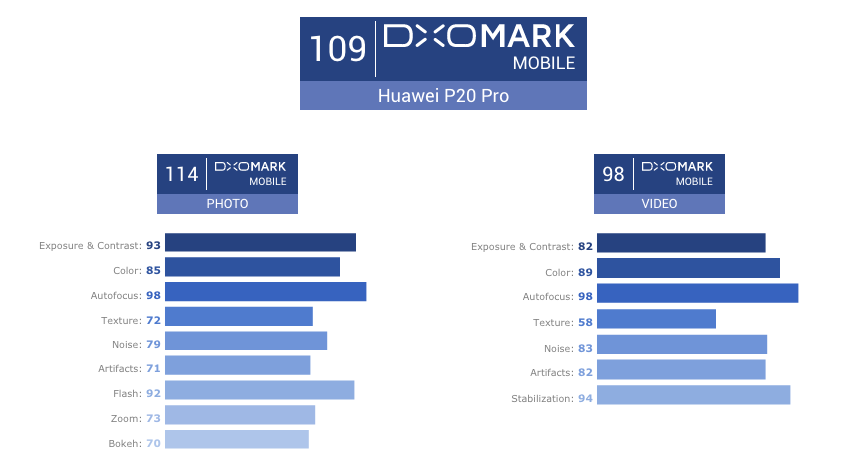 The Huawei scored a 114 for photo quality and a 98 for video quality. Combined, it got an overall score of 109. Now this might not make sense independently. But when compared to other phones, it’ll make clear who the winner is.

The Huawei P20 Pro beat the Samsung Galaxy S9 by 10 points. It had the highest rating for a smartphone in terms of camera quality. It  beat the Google Pixel 2 by 11 points and iPhone X by 12 points.

A side by side comparison with the flash on.

Now 10 points might not seem like a big difference, but this is one of the most competitive Industries in the world where Huawei competes with the best of the best like Apple, Google and Samsung.

In a 100 metre race in the Olympics, a few nano-seconds matter. If this was to be compared to the analogy of a 100 meter race. The Huawei P20 pro is seconds ahead of its competitors. It’s not even a match.

Why should you go for the Huawei P20?

The Huawei P20 is arguably the best smartphone ever made, if your number one priority is the camera.

For those of you who are interested in this phone, reach out to us at Red White Mobile and get the best prices for the Huawei P20 Pro in Singapore.