The Successor of Galaxy S7, S8 has been launched and we are quite charged up to let you have the hands on comparison between the two phones. Previously while Samsung galaxy S7 and S7 Edge were impressive, they were not able to mark the number expectations. But now Samsung is betting on the newly launched Samsung Galaxy 8. Rumored to have quite similar features and look like its previous flagships, does S8 really is like S7 or are there any key differences? Let’s find out. 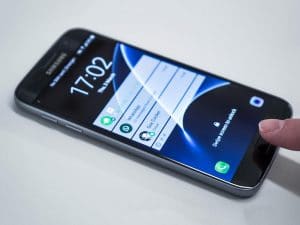 Finally, Samsung has bid goodbye to its flat screen phones. The Galaxy S8 is no other, which comes with a dual curved screen. But apart from the dual curve, there are quite a few notable changes in the design, which we are simply loving. There is not much difference at the backsides and side panels of the phone. The glass and metal design in front and back have been same as in S7.

The major difference in the design is in the front view of Galaxy 8. This time, Samsung has let go off with all the physical features on the phone like no Home Button at the bottom, No big Logo of Samsung at the top making the screen look more beautiful and blended all along. They have banged on perfectly this one, which simply looks a stunner!

The home button is induced in the screen itself with a pressure sensitive Home button on the screen. There is a fingerprint sensor on the back of the phone placed right next to the camera. Oh Yes, Samsung Galaxy 8 has not let go off with the headphone jack like its Rival, iPhone.

Screen – Much bigger and better 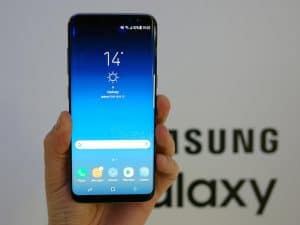 Galaxy S7 boasted of having the best screen available in the market but now its successor has claimed the position in many ways. With the screen size of 5.8 as compared to its predecessor of 5.1, S8 is more vivid and prominent as compared to S7.This time there is HDR support leading to the extravagant and scintillating use of the high definition games and videos compatible with the display of the screen. The screen is said to have protected with Gorilla Glass 5 and is IP68 Water resistant.

There is not much difference in the Camera going by the same 12 Mp rear camera with F/1.7 aperture. Only the selfie camera is improved in S8 with an 8Mp front camera with autofocus.

It seems with S8, Samsung has emphasized more on the software part for better results. The one feature, which is why S8 is most talked about, is its very own virtual assistant, Bixby. Bixby is set against the Google’s assistant, which is said to be based on the AI technology. The Bixby assistant would be able to perform certain functions like controlling of the apps, searching images, Mobile payments etc.

Also, Samsung S8 comes with latest Android version 7.0 Nougat while S7 had Marshmallow, which was upgradable.

Storage and Battery – Quite the same

Galaxy S8 comes with a battery of 3000Mah, same as the Galaxy S7 but with a wired and wireless charger option. It is said that with 5 minutes of charging, your phone would have a battery backup of 5 hours. If that comes to be true, life would be sorted! S8 have Snapdragon 835 which is termed to be more powerful and efficient than S7’s Snapdragon 820. The final verdict of runtime cannot be known until they are set against each other.

As far as Storage capacity is concerned S7 had the adoptable storage option expandable to 200GB with internal 32 GB while the S8 has internal 64 GB storage which can be expanded via SD card up to 256 GB. The Ram offered by S7 and S8 are same i.e. 4GB.

Samsung Galaxy S8 was considered to be the best Android phone but with the entry of S8, the value has definitely increased.  It is to be seen that how much difference S8 has from its predecessor S7 in terms of Performance after they are pitted together but with the latest Technology and features added, S8 Looks class apart and very promising too.