Huawei mate 9 pro is the latest release from the Chinese phone maker Huawei and it has already created much excitement among the buyers. It was not so long ago when Huawei announced the release of their first regular Mate 9 and after some time we now have Huawei Mate 9 Pro in Singapore which is possibly the best conclusion that the Mate 9 series could have received. Though the Mate 9 Pro is not still as widely available as the Mate 9 but if you manage to buy one for yourself then you will get the best thing in the Singapore market at a reasonable price.

The Mate 9 Pro is a real attention seeker and it makes every person fall in love with it by its amazing looks and most beautiful build up. The curved front glass of this smartphone is truly appealing and catches the attention of the buyers instantly. If you think clearly then you will remember that Samsung started this trend with the release of their S6 Edge which even continued to their S7. Though there were various flaws in that flagship’s design but Huawei has managed to implement that concept into their own design perfectly without any flaws.

Huawei Mate 9 Pro has a curved 5.5 inch AMOLED screen which displays everything at 1440p full HD clarity along with a pixel density of 534 PPI. The mobile screen will be safe from any unwanted cracks as it comes with Corning Gorilla Glass EMUI 5.0. The screen is really vibrant and the colour ratio is perfect thereby displaying your content most beautifully. Moreover, the curved metal body which comes with a flock of different colours is truly mesmerising which has made every smartphone user in love with it. 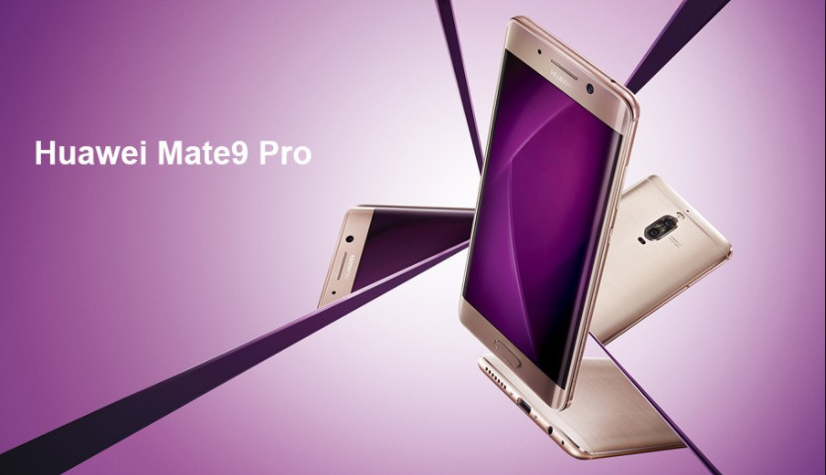 Huawei Mate 9 Pro uses a 2.5GHz octa-core Kirin 960 processor to process the all the commands given to it and it takes the aid of a 4GB RAM to do so efficiently. Thus, when you are using the Huawei mate 9 pro you can expect to get an amazing functionality along with an eloquent display and build up. Mate 9 Pro also has a 64GB and 128 GB internal storage but can be expanded with the help of a 256GB microSD card. Moreover, it runs on the all new android 7.0 platform for the better user experience and uses a 4000mAh battery as well as fast battery charging to ensure that the buyers get the maximum battery backup.

When it comes to the camera, the Huawei Mate 9 pro has a 20-megapixel rear camera which captures robust pictures and the camera let alone is enough to make you fall in love with the Huawei Mate 9 Pro. It also has an 8-megapixel selfie camera which helps you to capture beautiful selfies all the time. With 2x zoom, phase detection & laser autofocus Leica optics, OIS and dual-LED (dual tone) flash the perfect photos will be ready to be framed.

Huawei Mate 9 Pro is the best possible conclusion to the mate 9 series. If you still have not got your hands on this handset then hurry and grab your mate 9 pro as soon as possible to be a part of a most eloquent experience.

Click HERE for our huawei latest pricing for this model.