Oppo Reno 7 has launched in Singapore alongside the Reno 7 Pro and the two new phones succeed the Reno 6 lineup from last year. Now the Reno 7 that has launched in Singapore is essentially a new wine in an old bottle when you compare it with the Reno 6. It’s got a new design and camera stack while the Dimensity 900 SoC remains the same as the Reno 6. We have reviewed the Reno 7 and Reno 7 pro taking it through our usual set of tests and here’s how it fares against the competition and whether it’s worth the asking price.

The official selling price of the Oppo Reno7 Pro 5G is S$999. Physical Oppo Concept Stores, as well as Oppo’s official Lazada and Shopee e-stores, began taking orders on January 15, 2022. Between 15 January and 4 March 2022, customers who purchase the Reno7 Pro at these locations will receive a promotional pricing of S$919, as well as a free pair of Oppo Enco Air earbuds and a pair of movie tickets to Reunion Dinner, while supplies last.

During the special period, the Oppo Watch Free may be purchased at a discounted price of S$99 (U.P. S$129) when purchased with the Oppo Reno7 Pro (15 January to 4 March 2022). Major carriers (Singtel, StarHub, M1), as well as approved shops, sell the Reno7 Pro 5G phone. The normal Oppo Reno7 5G will go on sale in February 2022, with further information regarding this variant to be released closer to the time. 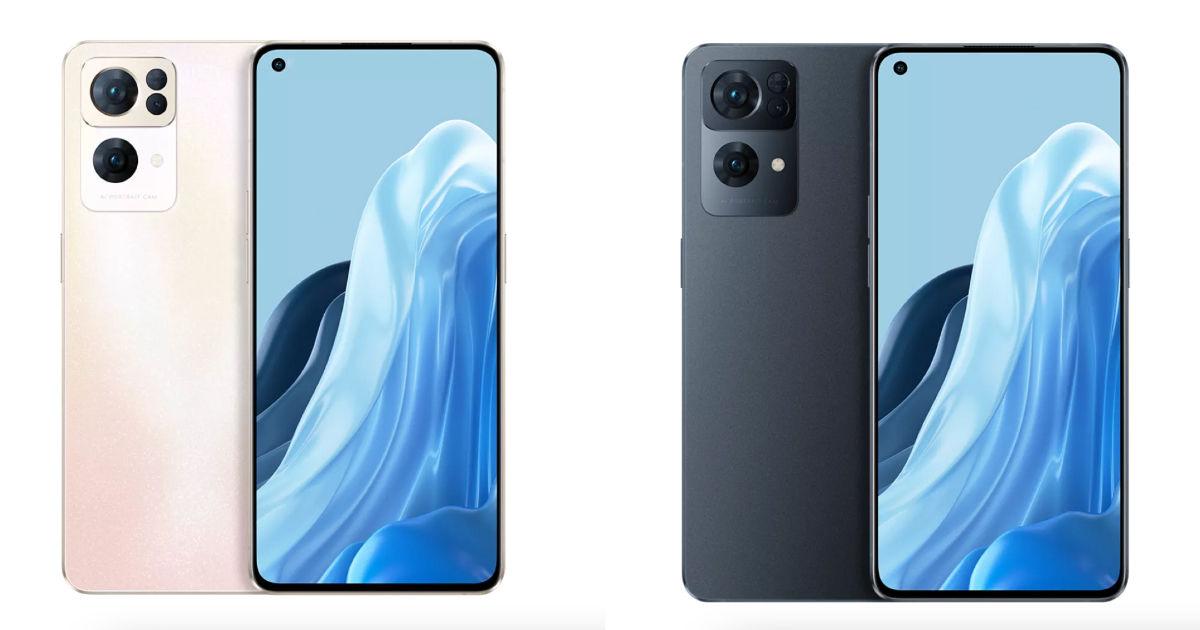 Oppo hasn’t let us down with its new Reno 7 series. Starlight Black and Starlight Blue are the two color options for the phone.

The Oppo Reno 7 boasts a 6.4-inch AMOLED display with a refresh rate of 90Hz and a touch sampling rate of up to 180Hz. The image clarity is excellent, and the colors are vibrant. The visuals are excellent in full-screen 1080p resolution. Because of its Netflix and Amazon HD Streaming certification, it’s a good panel for movie streaming.

On testing, we found the device can have a touch sampling rate of up to 180Hz, making it very responsive to touch. Though this is of good quality, it occasionally resulted in the unintended pressing of a few alternatives.

By not adding a sound system, OPPO has lost some brownie points. The phone just has a single speaker, which is a bit of a letdown.

To achieve the stunning glossy matte texture on the Reno 7, OPPO used Laser Direct Imaging (LDI) at the back end.

When sunlight shines on the back panel, the twin shades blend into one another. It’s simpler to grasp in your palm without slipping because of the matte texture. The device is only 173 grammes thick and 7.81mm thick, making it a good fit in your hand. The smartphone has neither a weighty nor a slick feel to it. It is simple to operate with one hand.

The Reno 7 Pro has a boxy shape that is influenced by Apple’s iPhone design. The phone’s rear panel is shimmering with a matte finish. A big rectangular camera hump, separated into two halves, is also present. Despite having an aluminum frame, the phone is small (7.45 mm) and light (180 grammes), making it easy to grip and transport. The phone has a fingerprint sensor and a front camera in the corner, as well as very slim bezels and a 6.5-inch display on the front.

The Oppo Reno 7 pro, on the other hand, lacks a headphone jack, which may be a disadvantage for individuals who like wired earbuds.

We tested the two products and found that Color OS 12, which is based on Android 11, runs on the Oppo Reno 7. Oppo’s custom skin has vastly improved over time. There are various personalization and modification options available with this skin. It includes Google Dialer and Messages, as well as Google Feeds on a single screen. Multi-tasking is made simple with features like a flowing window and split-screen.

The MediaTek Dimensity 900 5G SoC, which supports 5G and Wi-Fi 6, powers the Oppo Reno 7 5G in terms of performance. The chipset comes with 8GB of RAM and 256GB of internal storage, which is more than enough for critical images, videos, music, and documents. RAM expansion is possible, which is a good alternative if you think you’ll need more RAM. Additional RAM comes in sizes of 2GB, 3GB, and 5GB.

In terms of day-to-day performance, the Reno 7 Pro performed admirably. You should be able to carry on with your normal activities without noticing any latency. It is only ideal for casual gaming in terms of gaming.

Bloatware was the first component that displeases you. The phone comes with a few pre-installed apps that aren’t really useful. However, those programs can be removed, which is a unique feature.

The Emoji functionality, which is comparable to Apple’s Emoji avatar, is available on the Oppo Reno 7 series.

The Oppo Reno Series has always placed a strong emphasis on the photography sector, and this time is no exception. A 64MP main camera, an 8MP wide-angle camera, and a 2MP macro lens are included in the Reno 7’s triple camera configuration on the rear. A 32MP selfie camera is located on the front of the phone.

On testing, in daylight, the 64MP camera captures photographs that are crisp, sharp, and colorful. Every feature is well-emphasized, and there are no distracting background elements. The collected videos are of good quality. The camera’s overall quality is excellent.

The Reno 7 Pro, on the other hand, has a triple rear camera arrangement that includes a 50MP main camera (Sony IMX 766 sensor), an 8MP ultra-wide-angle camera, and a 2MP macro camera. A flashlight and a color temperature sensor are also provided by the camera hump. A 32 MP selfie camera is supported by the front camera (Sony IMX 709 sensor). The colors appear to be bright and, most importantly, genuine.

The impact was on point when filming video or collecting photos. The front camera took good pictures as well. Aside from this, the phone also allows you to take pictures in HD mode, Panorama, Expert, Slow Motion, Time-lapse, Dual-view video, and other modes.

The Oppo Reno 7 has a big 4500mAh battery. It supports 65W Super VOOC fast charging.  When you aren’t using the smartphone, the Super Power Saving Mode and Night Time Mode help save battery life. Upon testing, we’re happy with the battery’s performance because it doesn’t discharge quickly and the charging speed is above average.

Reno 7 pro is equipped with a 4500mAh battery that may last up to 1.5 days on a single charge. The Reno 7 Pro’s battery life was adequate for regular use, which included gaming, accessing the internet, viewing videos or movies, taking calls, making video chats, and using social networking applications. The phone comes with a 65W fast charger, so charging is quick.

We evaluated the Reno 7 Pro, and the Dimensity 1200 Max processor inside is a fast processor for everyday activities and light gaming. We tested the Dimensity 900 SoC on the Reno 7 and found it to be good for multitasking but not fast enough for games like BGMI.

Both Reno 7 series phones have a starlight-like appearance and strive to shake up the mid-end market with gorgeous aesthetics and decent specifications, but they are not the same.

The Reno 7 Pro and Reno 7 are priced differently and cater to distinct types of clienteles. While one offers a high-resolution camera, the other has features such as microSD card support. Overall, there are some variations between the two phones, and we recommend that you choose based on your functional preferences.